Schools Reopen In Delhi, Tamil Nadu And Kerala After Months Of Closure Due To COVID-19 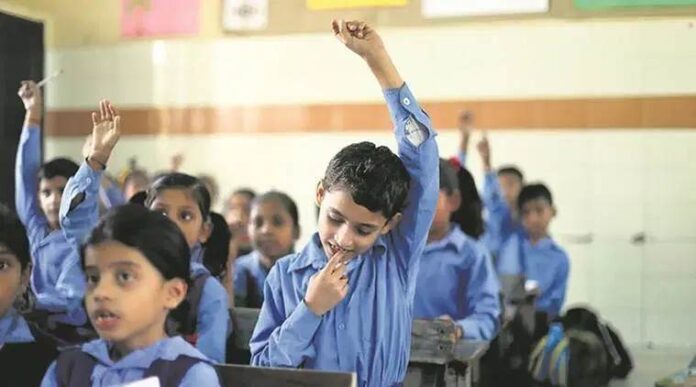 After 19 months of closure, schools reopened in Delhi, Tamil Nadu and Kerala on Monday adhering to strict COVID-19 protocols as children were excited to be back on campus, meeting their friends and teachers, with whom they were limited to interacting online.

Masked students, thermal scanning, and volunteers guiding staggered entry and exit for children was a common sight at the schools where children, from tiny tots to junior wing students, were welcomed by teachers who gave them tiny gift packets and sweets. While several schools in Delhi reopened with 50 per cent seating capacity, majority of private schools have deferred the reopening to post Diwali. Deputy Chief Minister Manish Sisodia visited the Rajkiya Sarvodaya Vidyalaya in East Delhi’s Vinod Nagar and interacted with students.

This is the first time after March 2020 that schools in Delhi are reopening for classes upto 8. In Kerala, students of classes from 1 to 7, 10 and 12 reached schools which were sanitised and decorated to welcome the children across the state. Offline classes for students in standards 8, 9 and 11 will start on November 15.

Children looked excited as some were going to school after a long gap, while kids of classes 1 and 2 attended school for the first time in their lives. School authorities welcomed children with gift packets which included books, pen, sanitisers, masks and balloons. Even teachers were excited as they could take a break from the online classes and physically talk to children and get feedback.

Parents were also excited that children will now be able to spend more time in schools rather than being limited to the four walls of homes. “As the mother of two children who live in an apartment, I feel that my kids need more space to spend their energy. In school, they will be able to talk to children of their age, meet their teachers, there will be activities to keep them busy and many more.

Parents are worried about children spending time with other students due to COVID-19 but the state government has assured that all precautions will taken in schools. School authorities have been directed to prepare mid-day meal for children and distribute them adhering to COVID protocol besides ensuring them the service of a doctor, the Education Department had said.

Most children seemed to be happy reuniting with their friends. The state government had in September announced restarting physical classes for the primary students from Monday, saying the decision was taken based on feedback from medical experts, educationists and parents. Stakeholders had opined that students faced stress and a gap in learning as they were confined to their homes since last year, following the emergence of the pandemic, the government had then said. Students of class 9-12 resumed attending physical classes in schools in the state from September 1, this year.

Every year, the registration numbers for Common Admission Test (CAT) suggest that women applying for the management entrance exam are half of...
Read more
Blog

Diwali means festival of lights, the awareness of inner lights which has the power to outshine the darkness all around. This is...
Read more
Blog

The Mizoram government on Friday eased COVID-19 curbs with reopening of schools and hostels in Aizawl Municipal Corporation area for students of...
Read more