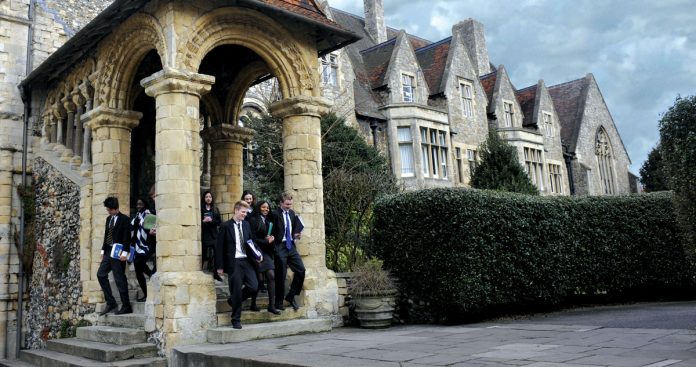 The world’s oldest school is The King’s School in Canterbury, England, founded in 597 AD.

With origins dating back to 597AD, The King’s School, Canterbury, is reputedly the oldest school in the world. It is also one of the country’s leading co-educational boarding schools located in the historic surroundings of the Precincts of Canterbury Cathedral, just one hour from Central London.

The Precincts of Canterbury are designated as a UNESCO World Heritage Site, giving a beautiful site and inspiring backdrop. When the Dissolution of the Monasteries took place, the School was re-founded by royal charter in 1541. A Headmaster, a Lower Master, and fifty King’s Scholars were established and the name “King’s School”, was used for the first time, referring to King Henry VIII. Throughout the next 100 years, a number of former pupils achieved national recognition, helping the school to establish its reputation.

The school was boys-only for almost 1,400 years, until the early 1970s, when girls were admitted to the Sixth Form for the first time, and the School has been fully co-educational since 1990. The school is also the oldest charity in the UK. Music is a flourishing part of life at the school with a range of disciplines from a large symphony orchestra to a 40-voice SATB choir of cathedral standard. There are some 60 music scholars in the school at any one time. The school has a strongly academic curriculum that is continually adapting to encompass the ever-changing demands of modern education. With almost all pupils going on to further education at leading universities in the UK and abroad, there is an emphasis on scholarly excellence. The infrastructure of this school is so unique and ancient which expressively speaks the uniqueness of the school

Counselling For School, College Students To Be Conducted: Pinarayi Vijayan

Kerala Chief Minister Pinarayi Vijayan on Wednesday said counselling sessions should be held for school and college students who may be in...
Read more
Interesting Facts

Do you remember when did you had a good Belly laugh last time?  Did you ever had a trouble remembering where did...
Read more
Interesting Facts

India has the Largest Open University in the World by Student Enrolment.

Indira Gandhi National Open University (IGNOU) India is the largest university with the enrollment of around 34,99,999 students. The enrollment number is...
Read more